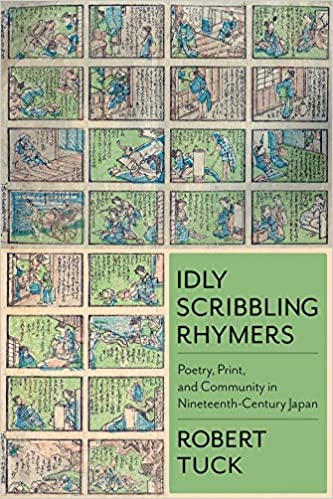 How can literary forms fashion a nation? Though genres such as the novel and newspaper have been credited with shaping a national imagination and a sense of community, during the rapid modernization of the Meiji period, Japanese intellectuals took a striking―but often overlooked―interest in poetry’s ties to national character. In Idly Scribbling Rhymers, Robert Tuck offers a groundbreaking study of the connections among traditional poetic genres, print media, and visions of national community in late nineteenth-century Japan that reveals the fissures within the process of imagining the nation.

Structured around the work of the poet and critic Masaoka Shiki, considers how poetic genres were read, written, and discussed within the emergent worlds of the newspaper and literary periodical in Meiji Japan. Tuck details attempts to cast each of the three traditional poetic genres of haiku, , and as Japan’s national poetry. He analyzes the nature and boundaries of the concepts of national poetic community that were meant to accompany literary production, showing that Japan’s visions of community were defined by processes of hierarchy and exclusion and deeply divided along lines of social class, gender, and political affiliation. A comprehensive study of nineteenth-century Japanese poetics and print culture, reveals poetry’s surprising yet fundamental role in emerging forms of media and national consciousness.
Read more